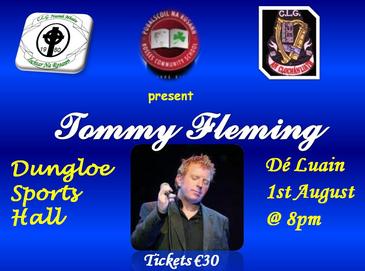 Tommy Fleming in Concert - Dungloe Sports Hall, Monday August 1st at 8pm. Tickets €30.
Naomh Muire and Dungloe GAA clubs, together with the Rosses Community School, have combined to promote and host Tommy Fleming in Concert as part of the Mary from Dungloe International Festival 2011.
The Internationally accomplished singer will bring his unique and ever popular style to the Sportshall Dungloe in what promises to be an outstanding night of song.


What will the proceeds be used for?
Proceeds from the night will benefit excellent local sporting and community projects withing both GAA clubs as well as ongoing works at the Rosses Community school.
With the help of the Lord Mayor fundraising campaign in 2010 the club where in a position to create a new training pitch behind the main pitch. The club are now in the process of adding new floodlights to this facility as well as upgrading the exisiting floodlighting. This will enable children of all ages, from under 8 to seniors, to use the new training pitch and main field right through the winter months. It is hoped to have these facilities in place from September onwards at which stage the evening will begin to get shorter and the lights will become very useful.

Tickets on sale now in The Cope in Anagaire or from any club member. Alternatively contact us via the website if you would like a ticket.