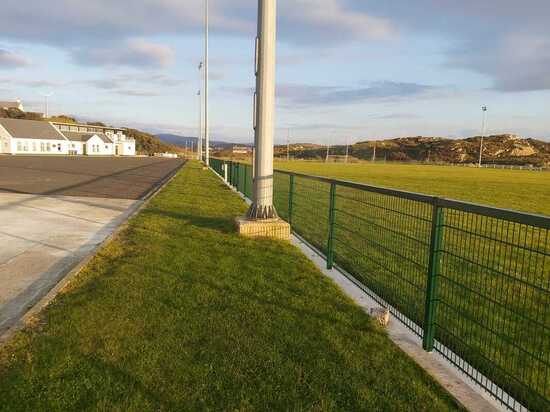 More than a fence......
During the 80s and 90s the Club were led by an exceptional group of brave individuals that guided us through our formative years. Visually, the Green and White wooden fence, that they constructed around the playing pitch, became one of the most charming and iconic sights of the Lower Rosses. It kept more than just excitable supporters at bay over the years!

As time passed the elements inevitably began to take its toll on "The Fence". It was starting to rot and become unsafe for our players and patrons alike.
One of the prayers of our development officer, was partially answered two years ago when the Department of Sport invited applicants to seek Sport Capital Development Funding. Tenders were gotten and a grant application to cover a replacement fence which would cost €70,000 was submitted. Although we were eventually approved €31,574, and this was less than half of the amount needed, we were delighted to have been granted anything as 5 other clubs who had looked for funding at the same time were not as fortunate.

Drawing on the standards set by former club officers and not put off by the shortfall, the parks committee asked for help with the replacement. A number of members put their hands up. The Old Fence was carefully dismantled. Shuttering was made on site and installed over a number of days and nights. Another night was spent setting sand into the bottom of the trenches. Once the new posts were in place the concrete arrived to finish off the apron. 7 men appeared on site one night, 13 another night, with shovels and wheelbarrows to finish the job. The quality of the finished fence is clear to see and something to be proud of.

Soon the local businesses that advertise at the pitch side will have their boards proudly displayed once again. The committee and the volunteers have delivered 2/3 of the fence around the pitch for less than half of the original €70,000 needed and at no additional cost to the club. Phil Ward has also managed to ‘hold on’ to some extra ‘free’ poles and frames with the intention of finishing off the tunnel from the dressing rooms on to the pitch.  All of this work is being done in preparation for us hosting the All Ireland Peil na Gaeltacht finals in 2022.

More Good Development News: We have secured Planning Permission to build a Spectator Stand and will be the next phase of our Development!
No doubt the Volunteers will be called to arms again.

Until then we have the old and new fence sitting side by side overlooking and protecting the pitch and our players. On one hand it is as if the fence is now tipping a hat to the great volunteers of the past and those proud members who were forced to emigrate from the area. While on the other hand it is symbolising a bright future for our current young and exciting Ladies and Men’s Adults teams and upcoming future generations.

The Fence is just another example of the selfless commitment and pride that exists in our community. The volunteers who worked on this project did not look for thanks or praise or anything other than humbly knowing that this was a job well done and done for the betterment of others. The new Fence was completed with dignity and out of respect to past Servants of our Club and those who are forced to live elsewhere. Their Vision for the youth in our community is turning into a reality.

Countless man hours and much sweat were generously given to the Club which is the heartbeat of the community. Without this contribution we would not be able to do what we are doing. Volunteering is what our Club and our Sport is all about.