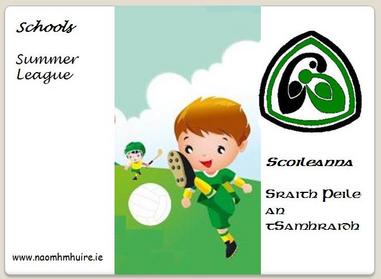 This years summer league starts on Thursday 12th May at 4.45 in the banks. The league will last for 6 weeks and there will then be a finals day when the league is finished. The league is for players who are still at National School and are aged 10 to 12. There will be 4 teams with each team playing 2 games every Thursday. Under 12 Go Games rules apply and there will be 2 points for a win and 1 point for a draw. The top 2 teams in the league will play in the Final.

The teams are as follows:

The 2011 summer league started this evening with 4 excellent games between the teams. Played in the the grounds of Naomh Mhuire @ the banks in round 1 Down beat Dublin by 4 points and Donegal got the better of Derry by 3 points. Two very close games with nothing seperating the sides. In round 2 Donegal made it 2 wins from 2 with the difference between the teams being the goals that Donegal scored. In the game of the night Derry edged past Dublin by a goal. Some great scores from both teams with the score of the night coming from Derry forward John mc Garvey who fired an unstoppable shot to the net. Derry full-forward Jason Gillespie also scored a hat-trick in this game.
So its Donegal who have started well and lead the table with 2 wins from 2 games. Next week we move to Celtic Park in Derry where the home feam will be hoping for a win against Down or table-toppers Donegal. Thanks to Robbie and Owen for Refereeing the games and to Brid and charlie for helping out. See you all next week.

Week 2 took place this evening in Celtic Park in Derry. With a strong wind conditions were tough but the football was still good. The home team took full advantage and won both of their games against Dublin and Down. A goal-hungry Derry scored 5 goals in both games and had excellent performances on the night from Declan mc Cready, Michael mc Fadden and Oisin mc Dowell. In the nights other games Donegal had a 2 point win over Down and then Dublin defeated Donegal in the game of the night by 2 points with a great 2nd half come-back and a couple of late goals from Thomas o Donnell. Jordan Doogan played well in goals with Andy o Gara, John mc Garvey and Jason Gillespie Playing well also. After 4 games Derry and Donegal lead the way on 6 points. Down and Dublin will be hoping to pick up a couple of wins next week to climb up the table. Thanks to Robbie and Aidi for refereeing the games and for Brid for helping out this evening. Next week its on to Croke Park where Dublin will have home advantage. See you all next week.


After week 4 of the summer league and 8 games the table is starting to take shape. Well done to Donegal tonight who have qualified for the final and have finished top of the table after another 2 wins tonight. It then looks like a clear fight between Dublin and Derry for the right to take them on in the final. Dublin lost their first 3 league games but are now the form team and have won 5 games in a row. Well done. Down would need a miracle to make the final and their only hope now seems to be the cup knock-out competition at the end of the season. Good performances tonight from Donnchadh Casey, Michael Greene, Declan mc Cready, Bernard Boyle, Noah Boyle and Steven o Donnell. Next week is the last week of the league with the finals taking place the following week. The battle is on to see who finishes in 2nd place and take their place in the final against Donegal.

After the final week of league games tonight Donegal have finished in 1st place in the league with 2 draws against Dublin and Down. Dublin finished in 2nd place after playing ouy a cracking draw with Donegal. Derry are the team coming into form and will be looking forward to the cup competition next week after 2 impressive wins this evening against Down and Dublin. Down finished bottom of the table and again they will be looking forward to the cup competition as well after drawing with league leaders Donegal this evening. There were 4 great games tonight with good football on display and all players battling for every ball. Good performances tonight from John mc garvey, Hugh Sweeney, Tomas Mari, Conor Duffy, Noah Boyle, Pauris Sweeney, Fintan Doherty and Jay Doherty. Well done to all teams. In 2 weeks time Donegal play Dublin in the final to decide who the winners are of summer league 2011.

Cup Competition next Thursday 23rd June @ 4.45
Next week in the summer league we have the cup competition. The draw was made this evening and is as follows.
Semi- final 1    Dublin  8 v 14  Donegal
Semi-final  2    Down  6 v  12 Derry
Final                 Derry 11  v  10  Donegal
Two great semi-finals are in store with a winner hard to predict. Derry have been going well and will fancy their chances of winning the cup. Donegal who topped the league play Dublin and they played out a draw in their last game. Both winners will meet in the final which will be played in Croke Park. See you all next week.


Derry are the cup champions for 2011 after beating Down in the semi-final and Donegal in the final. A great evenings football from all teams with the highest standard of the summer league so far. In the semi-final Donegal beat Dublin by 14 scores to 8 to get through to the final. This was the best team performance of the league so far with all of their players playing well. Led by Jack o Donnell and Luke Sharkey and great defending from Steven o Donnell and forward play from Eugene Byrnes and Pauric Sweeney they managed 14 scores. In the 2nd semi-final Derry overcame Down by 12 scores to 6. Great point-taking from John mc Garvey being the difference. In the final another great game was in store with Donegal winning by 11 scores to 10. Again John mc Garvey was the scorer-in-chief and was well assisted by Jay Doherty, Michael mc Fadden and Jason Gillespie. It was nip and tuck all the way and Donegal had a chance to equalise with the last kick of the game but they took a short free and it was game over. Well done to Derry who are the cup champions.

Next Thursday we have the finals week of the summer league. In the A final Donegal who finished as table-toppers will take on 2nd place Dublin. In the B final Derry who finished 3rd will take on Down. The games will be 15 mins per half and 2 great games are in store. Will Donegal get over the disappointment of losing the cup final to Derry or will Dublin be able to cause a shock. We will know next Thursday who the 1st summer league kings for 2011 will be. See you all there at the same time. Please come down and enjoy the football next Thursday evening and show your support for the young lads.


Dublin are champions for 2011

Dublin are the champions of the summer league for 2011. In a great final against Donegal, Dublin finished strong in the last 2 minutes to win by 14 scores to 11. A couple of great scores from Declan ward and jason gillespie saw them over the line. Well done to both teams on a great game. In the B final, Cup champions Derry came from behind to beat Down by 8 scores to 7 with the winning point coming with the last kick of the game. Well done to all players who took part in the league and to everyone who helped out.