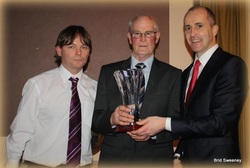 Jimmy Doherty was this years Hall of Fame winner and boy what a deserving man. This page is too short to outline Jimmy's contribution both on the sideline as Bainisteoir and off it in developing the facilities on view today. Jimmy gave the Club his all taking us to Division one, Intermediate Champions, Senior Championship football and acted as Chairman and Club Uachtarán. A humble man who has achieved much in his life and it was great to see Jimmy on the stage last night receiving this great Honour. Although he has returned to the quieter game of golf "far from the madding crowd"...Jimmy is still around us in the oft heated GAA scene . Congratulations Jimmy Doherty and most richly deserved. 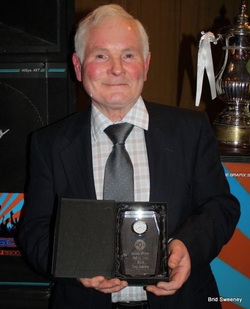 Antoin Ó Dochartaigh or Tony Doherty was born in London in 1936 moving to Ireland when he was 3 years old.
Tony lived for the most part of his life at home here but he like many of his friends and family emigrated in search of work in the 50s  60s and 70s spending time in the North of Scotland and for nearly ten years in  Leeds before returning home where he looked after his elderly parents as the perfect carer in the latter and comfortable years of their lives.
Tony Doherty was always a true Gael. His love of Gaelic football has followed him his entire life from the small green fields of Rann na Feirste to the large wide playing parks in Yorkshire and throughout his native Dún na nGall. Tony was an accomplished player always giving it his all each time he pulled on a jersey. His pride in playing for Rann na Feirste was always evident to those team-mates who recall him as a tough, honest and no-nonsense player with his huge heart making up for his small stature.
If Tony’s playing days are remembered, it is as a GAA organiser that marks him as a truly outstanding servant to the Association, Rann na Feirste and in particular to our Club Naomh Mhuire which we mark here tonight, a commitment to this club of 31 years and counting.

Tony never sought the role of least work or effort within our Club. Instead he took on the tasks that few others would consider. Long before there was the luxury of sub committees for this and that.....Tony WAS the Committee. Many of us recall a weekend in the life of Tony to include fixing a broken crossbar on a Saturday afternoon in the Banks, chasing up players on the Saturday evening, booking Feda’s bus for the following week, lining the pitch in between masses on a Sunday on his own, possibly picking the team on the Sunday afternoon and/or going around the cars with the biscuit tin for needed funds and then trying to lift the spirits perhaps after a heavy defeat. Later that Sunday night Tony would stand on the door of Jacks for hours at a function as treasurer trying with great difficulty but with huge hope to keep the club ticking over. The rest of the week could see him attend county board or southern board meetings or transporting players to county minor trials in either the famous green vw beetle or the yellow Opel Kadett. This was a typical week for many many years as the Club got on its feet.  Without this carrying of the Club baton until more resources came along and until we developed other club officers….Tony had his shoulder firmly to the wheel……and seldom if ever saw it as hard work.
Tony was hugely involved in the great facility that we have in the Banks today. Along with others Tony saw a vision that improved facilities would see the Club grow. He was a great help, support and strength to the development work in the late 90s and he deserves great credit for his usual no fuss but all out effort there.
Today, many years later, after filling all of the roles others shyed away from, Tony is our Club President. We know it’s a role he is uncomfortable in because of his humility but one which we want him to hold. Tony still lines his beloved pitch and attends club meetings encouraging and supporting further development.  His 31 years of service can in no way be explained  in this small piece of reading nor can it be talked about in a single night. However as a first recipient of this award, his name required no level of discussion.
Without his valued contribution, his unselfish commitment, his years of dedication, his vision and encouragement when there were dark days…. we have no doubt that we would either not have come this far as a club or would be the weaker without him.  We have been blessed as a Club to have had him on board for 31 years.
Ladies and Gentlemen as a first recipient of the Naomh Muire Hall of fame award 2012, please be upstanding for Tony Doherty. 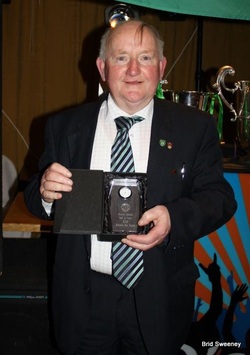 Séamus Rodgers is a native of Annagry and a founder member of our Club. Séamus has given a lifetime of service to the GAA being involved with Dungloe, The Crone’s, Rosses Rovers and Rann na Feirste. Séamus had the honour of serving as Chairman of Donegal in the late 1970's. His greatest contribution has been with Naomh Mhuire for 31 years, the reason for his award here tonight.
In his youth Séamus was a noted player in the Rosses and throughout the county. Along with his late brother Joe, he joined ranks with friends and neighbours enjoying getting together with local lads and playing Gaelic football with great commitment. He is remembered as a tough versatile player by his playing mates from around the Rosses shoreline.
Séamus developed into an outstanding Administrator within the GAA and these qualities would see him achieve many days, weeks , months and years of continuous Gaelic football organisation especially in his beloved Lower Rosses.  The playing of Gaelic games is made possible only when organisers and people such as Séamus give unselfishly of their time and skills in ensuring the best for their Club. Without administrators and organisers there would be no games. Séamus was involved as an official with the Ranafast Junior winning side of 1969 and following an outstanding semi-final victory over Ballyshannon in Letterkenny Seamus’s Anglia decided to stop dead at Teach an tSlashaire and among its passengers was Patrick McGinley who had already covered every blade of grass in an effort to subdue the great Mickey McLoone. Without an ounce of mechanical knowledge between them, Séamus led his playing passengers on the long walk to Dún Lúiche……..core strength and conditioning work long before its time.
In 1980, Séamus was central to the formation of Naomh Muire. He was our Chairman then and for many years. He was our link with the Donegal County board and his name and presence carried respect as the club established itself. Séamus could see from his experience that a club based in the Lower Rosses was what was best for our area and this quiet but determined approach by him and others was the right move then and it’s the right move now.
Séamus is a great supporter and active participant in the all important cultural  part of the GAA within the Club.  His role as Oifigeach na Gaelige down through the years has been carried out with great love of the language and ensuring that both our language and culture remains an important part of our Club set up.

Séamus’ role as P.R.O. set a great standard of communication of Club events for those at home as well as past members abroad. In today’s world of Facebook, Séamus set the standards long before with his weekly notes advancing the Club activities without fail. He took our club weekly news to Sydney, Perth and Melbourne, New York, Boston, London, Leeds and everywhere our club flock were many appreciated that update.
Like Tony Doherty, Séamus was central to our current facilities in Mullach Dearg. Using his well developed negotiating skills used in his lifelong position as a leading Senior Union official Séamus worked his magic in securing lands and chasing up the funding required from Government  sources to help with that great development. As Chairman, he led the committee team in transforming an often flooded pitch with only a bush and a car to change into what is there today.  Séamus has been central to that great legacy.
Séamus has been a solid clubman as well as a steady leader. His use of diplomacy has often been needed in the often tense cauldron of the meeting room where many  in the desire to push through a point  felt strongly about will perhaps loose themselves only for Séamus to remind us of the greater good in making a decision where the Club as a whole benefits. This skill is the gift of a few and we have been fortunate to have someone with that talent on our journey.
It is of no coincidence that it is along with his great friend and comrade both great servants, we honour him here tonight as a first recipient of this award which he richly deserves. His guidance, stability, calmness yet determined vision has taken us along a path which positions our Club the envy of many in our County. We have been honoured to have him with us…..
Ladies and gentleman…..in honouring him in the Naomh Muire Hall of fame 2012…please be upstanding for Séamus Rodgers.